Home > Knowledgebase > Wound Database > .30 cal - Hornady A-Max
Hazel, so far our .30 cal champion provides us with more to view.  Below is the result of the 178gr A-Max at an impact velocity of approximately 2770fps, used on a boar.  The boar had a very bad day, the bullet entry wound is shown between the finger tips.  A deep stab wound is evident behind the shoulder.  This is the result of a fight this boar had earlier in the day with another boar in the area. Also pictured is the remains of the cup and core of the A-max which bounced off the offside hide and went back into the chest cavity.  Rebounding is common on very tough boar when using light to medium bullet weights of all bullet designs (apart from Barnes) at close ranges.

The 178 grain A-Max in this instance, was being utilized as a long range load in Hazel's .300WSM.  The boar pictured was encountered at close range.  Here we get to see how the both the 168 and 178gr A-Max bullets perform when pushed to extremes, note the large entry wound into the chest cavity followed by a small exit wound through the offside ribs, but without full exit.

It is worth noting, this boar did not collapse instantly (hydrostatic shock) though the bullet weight and construction combined with the game weight (50kg / 120lb) were well matched.  I have only been able draw two possible conclusions.  This boar was very heavy and dense for his size / mass and may have presented too much resistance (imagine a secretary trying to KO a heavy weight boxer) or just as likely, the boar's body chemistry had been altered due to the previous fight with the boar, altering his shock reaction temporarily.  Regardless, at the shot, the boar broke into a run but died within 15 yards, such was the internal trauma.

Exit through ribs prior to bounce back.


208 grain Hornady A-Max
Below is the result of a 208 grain Hornady A-Max at an impact velocity of approximately 2100fps on a feral goat. After full fragmentation, the remaining fragments have penetrated the rumen pictured, note the even pattern, twelve main fragments in total, similar to a 12 gauge shotgun loaded with buck shot used at point blank. Fragmentary wounding is a key factor in fast, clean killing at long ranges in the absence of high velocity.  Or explained another way;in the absence of disproportionate to caliber wounding / hydraulic shock.  The Heavy A-Max bullets excel in this role.


208 grain Hornady A-Max
Below, a Red stag, shot in the Ruahines during the 2012 roar.  The rifle was a .300 WSM loaded with the 208 A-Max at a very fast 2800fps. Range to the stag was 397 yards, impact velocity 2264fps. The stag was shot in the center of the front right leg,(shoulder) and came to rest against the skin of the left rear leg. 115gr of the fragmented projectile was recovered.

Internal wounding. Basically, the entire chest cavity has been destroyed.

Exit, bullet came to rest against the skin.

Fragments of the 208 grain A-Max


168 grain Hornady A-Max
Bob from the UK shot this Roebuck using the 168 grain Hornady A-Max. In Bobs T3 .308 rifle, 44 grains of H4895 (ADI 2206H) yields an average 2724fps.  Impact velocity for this shot was 2463fps. The buck collapsed on the spot and never recovered.  Bob described the internal wounding as massive, some of which can be seen in the internal organs photo.  All in all, a very clean, humane kill.


The heart is completely destroyed as is the autonomous plexus (nerve center between the heart and lungs) which caused instant death.  The lungs are also destroyed although this cannot be seen in the picture, save the large fragment at the 2 O'clock position.

So why did this happen? By the look of the wounding (as much as I can tell from the supplied photos), the autonomous plexus of the Fallow deer was destroyed due to the very wide internal wounding which extended forwards of the shoulder. This is the most likely explanation.

Sometimes, the above explanation is not applicable though. It is not uncommon for the 155 grain A-Max to produce delayed kills on larger body weights. If we were to use Milos' deer as an example,  there was a huge difference in body weights between the two animals. The Fallow around 40kg, the Red hind was 115kg. The projectile had enough velocity to initiate hydrostatic shock, essentially a shock wave spreading up the ribcage from the POI to the spine, shutting down the nervous system as occurs with a knock out in a boxing match when a boxer is struck on the jaw.  But in this example, on the Red deer, the frangible 155 grain bullet can meet too much resistance.  I often see it as a case of whether the bullet will yield or whether the animal will yield.  In this theoretical example, the bullet struck, fragmented within the first 10mm/ .4" but the shock wave was not strong enough to reach the spine (CNS). The bullet continued into the chest cavity, rendered an immensely broad wound which caused the fastest possible bleeding, the hind eventually expiring from blood loss.

Fallow deer, entry side, deer was quartering away from Milos, head to the left. 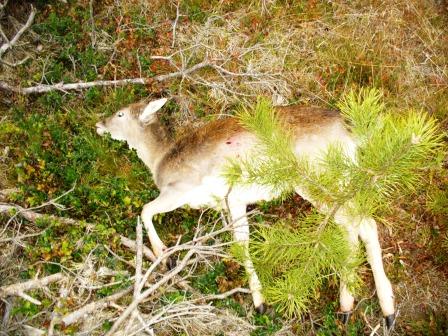 Entry.  Note how the A-Max has already fragmented (width of entry wound), initiating wounding.  A good controlled expanding hunting bullet will also do this.

Unfortunately we have no internal wounding pictures but the offside shoulder wounding gives a clear indication of what transpired, in many ways similar to Bob's Roebuck.

With the lungs upside down, the full extent of the fragmentary wounding can be seen.  The result is a clean kill, as fast as can be expected without coma to ease the way. I have a mental picture of Milos' wife "Milos! Why are there lungs in the [email protected]#%$!.

A better bullet for Red deer? Poleaxing a Red deer with a chest shot isn't the easiest of tasks.  In the .308 Winchester, a heavier bullet can deliver more 'punch' but quickly loses velocity.  In the knowledge base, readers will find my oft quoted cut of point for hydrostatic shock on deer at 2600fps. When the .308 Win is loaded with a 165-168 grain bullet, 2600fps is often breached inside 50 yards from muzzle velocities of 2670fps. 180 grain bullets don't even reach 2600fps at the muzzle. A heavy frangible bullet such as the 168-178 grain A-Max can bridge the gap, causing coma not instantly, but within a few seconds due to the wide trauma across the nervous system (pain receptors). In such cases, the deer will often mill around on the spot, then drop.  Projectiles like the 165 grain SST are also very good, delivering heavy trauma. Red deer may run when hit with the 165 grain SST but not far.  Hornady have one short range solution for .308 users, the 165 grain Superformance load yields 2820fps in 22" barreled sporting rifles, producing hydrostatic shock out to a range of around 110 yards. This can be duplicated using SF powder.

Sometimes delayed killing is simply something we have to make piece with when using certain cartridge combinations. We do our best to select a good projectile, do our best with shot placement and hope that the animal does not suffer and we hope that we do not lose the animal (dead run) if hunting in heavy bush/woods or on bluff systems. The autonomous plexus shot placement is ideal for anchoring game on the spot but hunters are often under a great deal of pressure when all is said and done and ideal shot placement becomes just that, idealistic. We do the best we can.