All welcome. Visiting New Plymouth? Please call in to our dojo located at St. Chad's Church Hall, Omata Road, very near to Francis Douglass College (the hall/dojo is behind St. Chad's Church carpark, to the left). You will be made most welcome. Sessions, as above: Tuesdays and Fridays 6.00pm to 7.30pm. Senior grades finish at 8pm.

Beginners: Ideally we'd like from around age 7 years and up. It’s great to see parents and their children training as well as grandparents with their grandchildren! First session free. It’s never too old to start, just give it a go! 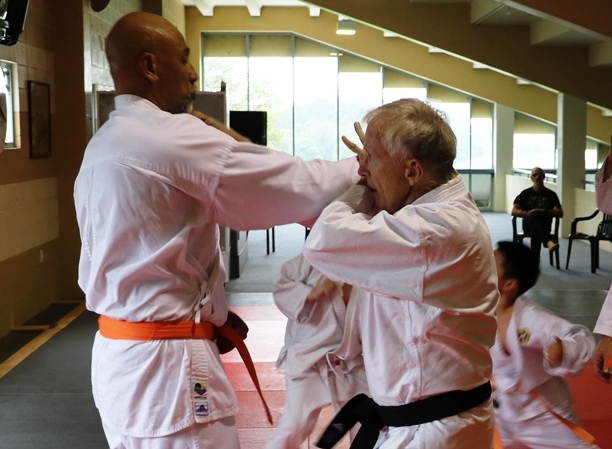 Shushikai Karate traces its origins to Gichin Funakoshi's Shotokan, the style named after Funakoshi (Shoto was his pen name). Masutatsu Oyama studied Shotokan, Goju Ryu, and added some Kempo (chinese) influence, and named the style he founded Kyokushinkai. This style successfully spread internationally including New Zealand in the 1960's. The New Zealand leader was Doug Holloway.

This New Zealand Kyokushinkai group later split into two; one with Holloway, the other with John Jarvis. Holloway's group became Oyama Kyokushinkai Karate Kan, and on his retirement from Karate was headed by Doug Jackson, James Bryce, and Bob McCallum (all Sensei). In 1975 with the help of the Japanese Embassy, the name Oyama Kyokushinkai was replaced with Shushikai Karate Kan. Doug Jackson being the remaining founder, headed Shushikai and was given the title "Kancho" (first of school). In 1985 Kancho Doug Jackson retired from Karate, and in 1997 the head of Shushikai in New Zealand, Alfred Terry (yon-dan), accepted the title "O'Sensei") and in 2005, the title of “Kancho”. Kancho Doug Jackson died in Australia in 2004. 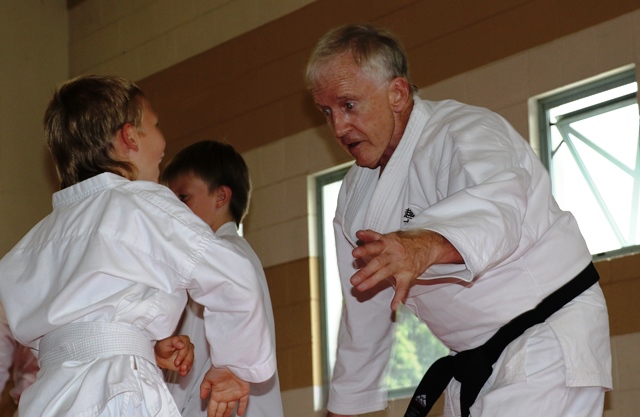 
The Badge (Mon, or family crest) of Shushikai Karate Kan

The badge worn by kai-in(students) on the left side of the karate training jacket is known as the togo. It derives from the times when the ancient Japanese warring clans needed an easily visible way to identify who was on which side in skirmishes and battles. The 'mon' as it was called became adapted and used by most styles of karate and is known in Shushikai as our 'togo'.
The Shushikai togo is very distinctive. The design symbolises core qualities aimed to be developed through training in the Shushikai style. The crossed white feathers represent the plumage of the Japanese hawk. The hawk is renowned for its amazing fleetness of attack and pin-point accuracy of its strike against its prey. The hawk attacks only from necessity - to eat/survive. The six-sided shape of the togo symbolises qualities found in the turtle/tortoise. This animal may seem slow and ponderous but despite its obvious handicaps it demonstrates the strengths of perseverance, resoluteness and refusal to give up against almost any odds.
So - the hawk and the turtle have much to teach us both in attitude and in skill. Together they give us a balance of qualities that the founders of the Shushikai style believed were, and will always remain, worthy.
The colours of the Shushikai togo are predominantly black and yellow for no other reason than these primary colours are regarded as having the most graphical visual impact.
Incidentally, the Japanese word Karate is a compound of two words. 'Kara' means 'empty'. 'Te' means 'hand'. Karate means Empty Hand. The preparedness for combat lacking weapons other than one's own body. 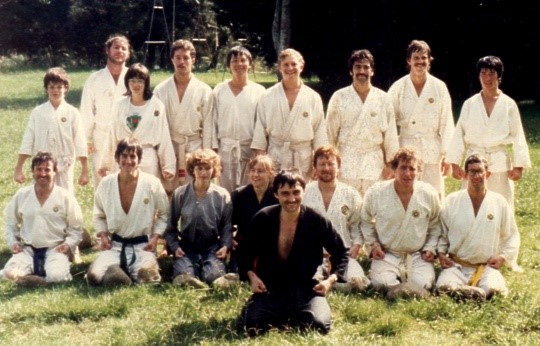 This photo was taken at Bell Block beach after a beach training session in the 1980's. More than likely, Gilmer sempai (now sensei) was behind the lens. In front is Foster sempai (now sensei). Do any of those reading this recognise anyone else in the photo? The names/faces Grant Everest (back row centre) and Chris Elliott (front row left) and Graeme Elliott (front row right) spring to miind. 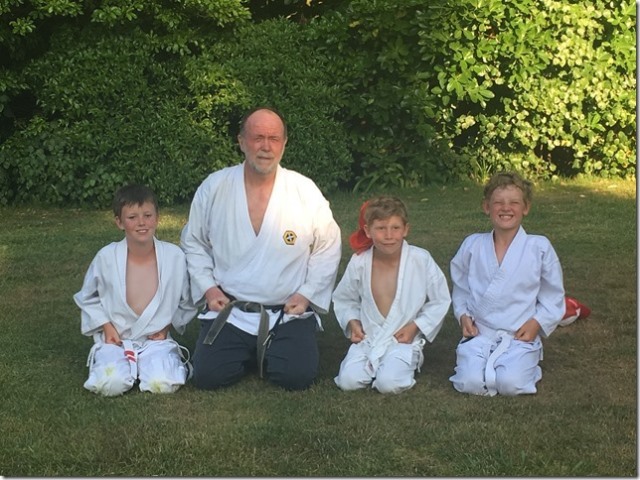 Errors and ommissions excepted re the above. If you, the reader, know of any others to add to these lists, please feel to contact Shushikai at the e-mail address herewith.