This article is written in the hope that those who are responsible for making such decisions will think carefully before taking action because there are consequences to this. Abolishing lead core projectiles before there are alternatives available that work equally effectively across a broad velocity range is irresponsible, imprudent and morally questionable.  Animals have and will continue to suffer as a result of brash decision making.

My name is Nathan Foster and I have researched terminal ballistics for most of my adult life. I was introduced to hunting at an early age and quickly became a passionate outdoorsman. My interest in terminal ballistics began to develop after witnessing slow, inhumane killing from certain rifle / cartridge combinations. It was the belief that many slow kills could have been avoided had the correct tools i.e. cartridge and bullet selection been utilized that drove me to became engrossed in the research of terminal ballistics. The Terminal Ballistics Research website is now the largest source of free information on the subject of cartridge terminal performance available to hunters in the world today.  Our published book series is sold globally, purchased by hunting and shooting enthusiasts from every walk of life. I am now considered a world leading expert in the field of terminal ballistics and consult with companies and government organizations worldwide. If you are a policy maker who has made or is about to make decisions about ammunition and have not consulted with me, I can honestly state that you are making uninformed decisions. There is no other researcher on the planet with my level of experience or skill in this subject.

In order to understand the pros and cons of copper bullets, one must have a basic understanding of how bullets kill. This will be explained as simplistically as possible for those who do not hunt. For those who wish to delve deeper into this subject, please see the online article Effective Game Killing on the Terminal Ballistics Research website and read the information contained in ‘The Practical Guide To’ book series.

A hunting rifle fires a high velocity bullet. Bullets used for hunting are designed to expand on impact. This causes an immediate transfer of energy to the body (or water content) of the animal. The bullet may expand to the diameter of a human finger however the rapid transferal of energy produces a hydraulic action. The action is such that rather than a ‘finger’ sized wound the wound channel may be as large as a fist once the bullet enters the animal. Wide internal wounding ensures destruction of vital tissue and organs, fast bleeding and death. This type of wounding can render an animal unconscious in such a rapid fashion that little to no pain is registered.

Narrow wounding created by a 30 caliber 168 grain homogenous copper bullet. This was a very slow kill.

Wound created by a full metal jacket .223 military bullet. Note how the width of the wound is similar to the homogenous copper bullet wound.

Traditional lead core bullets offer optimum performance due to the fact that at mild or low impact velocities, the bullet sheds weight. This weight loss helps increase the size of the internal wound. In other words, it is possible to retain a wound channel that is between 1.5 and 3” in diameter, regardless of the impact velocity. A premium (including core bonded) bullet may lose 25% of its weight while other designs may lose up to 50% or more weight. Some weight is retained for penetration while some weight is shed which ensures very wide wounding for fast humane killing.

Major bullet making companies such as Hornady and Sierra understand that a bullet which sheds weight is the major factor in fast killing. Hornady for example produce their environmentally friendly GMX copper bullets however the bulk of their recent research has gone into the fast killing ELD-X lead core bullets. Why? Because the staff of this company are themselves hunters.  A slow kill causes a great deal of consternation and affects all hunters, whether they are consumers or bullet manufacturers.


The cartridge above is loaded with a premium Woodleigh core bonded design.The recovered projectile (shown at left against the skin of the animal) shows a balance of weight loss for energy transfer versus retained weight for deep penetration.
Hornady Interlock (left) and SST (right). These are fast expanding lead core designs which transfer maximum energy for fast clean killing.
Wound created by a lead core, weight shedding bullet. This particular bullet is designed for the low velocity .35 Remington (200 grain Hornady FTX).

The current copper bullets that are being pushed by various environmental organizations cannot achieve the type of wounding needed to consistently produce fast clean kills. These bullets do not shed weight (though some custom designs shed petals with limited effect). Without this shedding of weight, wounding is narrow  therefore accordingly the margin for error becomes greater, in plain terms if the hunter does not strike the animal perfectly or does not have very high impact velocities on his side, the greater the risk of a slow kill. In some cases it may take days for animals to die. While it may seem that copper is the environmentally friendly choice, one must ask the question; is this the ethical solution? 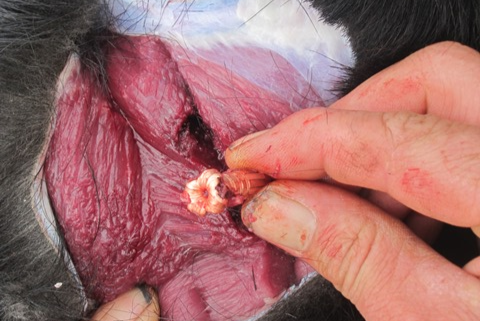 A .30 caliber homogenous copper bullet. Note the small frontal area. The bullet has retained all of its weight.

A non hunter might suggest that it is the hunter skill levels that need to be addressed. While there is some truth in this statement, the skill level of a hunter is just one variable to be considered when discussing ethical and humane killing. Non hunters need to understand that there are several factors which effect outcomes. For example:

Get your facts straight

The following are two downloadable articles which argue that blood lead studies can and have been corrupted:
Click here to download - Eating game shot with traditional ammo (PDF).

Click here to download - Presentation on corrupted study data (Power Point).
If the studies of blood lead levels are indeed corrupted as has been suggested in the previously highlighted downloadable documents, then we should put this to rest. The timing of the initial studies was certainly suspicious as they arrived during a new wave of anti gun sentiment in the U.S, funneling hunters towards expensive yet often ineffective ammunition. One Californian politician was also caught out making statements to the effect that the best way to control guns was via ammunition supply. Lead core bullets were banned in California some time after this, a very underhanded form of gun control.

For those who live in areas where bans have already been put into effect, it is vitally important to understand that there are non-lead core, non-solid copper options currently being developed, however this new technology is still in its infancy and not yet widespread. The foremost example of this is Dynamic research Technologies (DRT). This U.S based company produces compressed non-toxic metal powder core bullets which perform much like traditional lead core bullets. But as suggested, this ammunition is not yet available in all calibers, nor is it fully available worldwide. 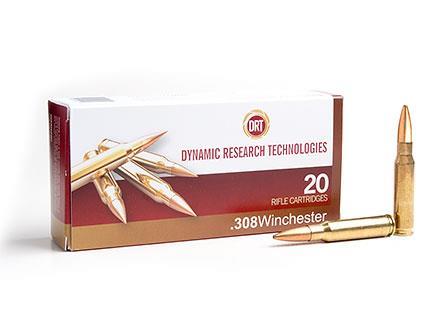 DRT offer both loaded ammunition and also reloading components. This is a truly environmentally friendly option. However, DRT are not yet making bullets for every caliber and need time to continue development of new projectiles including heavy weight bullet designs.
A quartering shot with a DRT 175 grain .308 caliber bullet. This shot was taken at an extended range, typical of mountain hunting. The kill was very fast.

RWS also offer a powder metal bullet design. The Evo Green is based on the traditional H-Mantel projectile design and features a tough rear core and frangible front core. But again, this ammunition is not readily available worldwide and the technology is still very young. In the below video clip an RWS representative admits to the problems of slow killing when using a typical high weight retention mono copper bullet and how the Evo Green bullet was designed in an attempt to overcome these problems.


A Lehigh 300 Blackout bullet- designed to kill rather than produce a pretty mushroom and not much else at low impact velocities.

If bullet makers are to make changes that offer benefits to both hunters and the game they hunt, then they need time and encouragement. Those who really care about our environment and the animals within it must understand this. Non lead bullet technology is still in its very infancy. It is not yet available to hunters worldwide.

A greater concern is that much of the driving force behind environmental studies looking at the effects of lead core bullets on the environment is simply anti-gun. In this instance, misunderstanding and hatred towards one group of people and a rush to 'ban' certain bullets has and will cause suffering of game species via potential slow killing. I have even seen some anti sentiment towards DRT ammunition from California officials which is doubly suspicious.

It is not acceptable to make changes to laws that will directly cause suffering to animals.

If you are a veterinarian, please for the sake of our animals take the time to study my research in wider detail. If possible, perform your own tests so that you can see results for yourself. And by tests, I mean game killing tests - not ballistic gelatin blocks.

I would like to mention that when homogenous copper bullets first arrived on the scene, it was the bullet makers that utilized the ‘environmental card’ as a way to promote their bullets. Many people walked right into this - and still do.

The one factor that makes this subject very difficult to relay, is that unless you have been in the field for yourself and witnessed slow kills, it impossible to drive home just how badly things can go wrong.

Traditional 'mushrooming' homogenous copper bullets can be useful and they do excel in certain roles. They are most useful where deep penetration is required and can at times out perform specific traditional bullet designs. But they also have severe limitations and should not be a sole option. Note also that as of 2020, the quality of copper bullet making alloy is now quite often very poor.

In Europe tracking teams have been busy with their dogs, attempting to locate wounded game shot by hunters who were forced to use copper bullets due to local legislation. The 2015 season following lead ammo bans was one of the worst on record for tracker dog call outs. The most pitiful aspect of this is that many areas of Europe have laws which impose minimum bullet weights. These laws have been very useful for lead core bullets but are hopelessly out of date regarding 100% weight retaining copper bullet designs. As an example, the 6.5x55 tends to perform much better on lean game with a 120 grain homogenous copper bullet than a slow and high momentum (energy retaining) 140 grain bullet. If copper bans are to remain - then the bullet designs need to evolve, whether that means using a compressed metal powder core or utilzing a machined weight shedding copper bullet as produced by Lehigh.

One comment I have heard is that "homogenous copper bullets are great because they cause less meat damage". This statement must surely speak for itself. The narrower the wound, the greater the risk of a slow kill.

Please do not attempt to eliminate the suffering of one species of animal, only to put others through greater suffering.

I believe hunting is a fundamental aspect of our genetic makeup. It is not for everyone but many do feel the calling in the same way a woman can have a deep desire to become a mother. My one desire is to see game animals, the very animals which give us energy and replace our very cells, treated with the utmost love and respect.